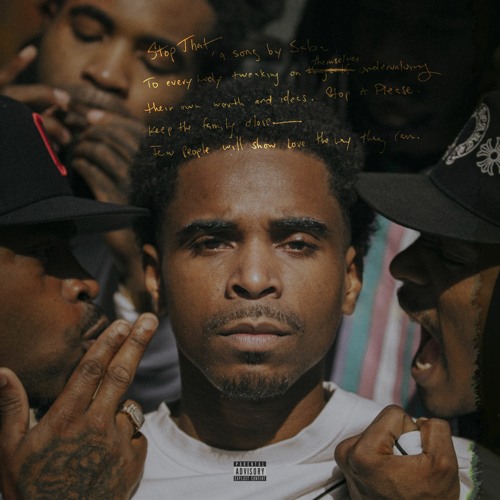 Give Rating
Saba is back with new single called "Stop That"

Today some feelings are leavin'
Couldn't help but feelin' mistreated
They sleep on my shit and then tell me to drop
I don't see the reason
My missus run shit like a chief
Together we gettin' mischievous
The bottom is way lonelier than the top
But these niggas ain't seen it
Stop that, stop it please
You more concerned what others earn, that says a lot to me
I turned a million down a million times, that's not a lot to me
The game is changin', I do the best that I can to attain it
If we gotta gamble, I bet on myself, all that other shit dangerous
I just made a way for myself from out west in my grandmama basement
So I think you ho niggas should bow in the presence of greatness, let's go

We talking 'bout generational wealth
The pressure I built for myself
For all of the people who pics on my grandmama shelf
Who heard her say "Give me the belt"
I would imagine one day, call it manifestation
A man would get taken away
We wasn't plannin' vacation, like internet bandwidth was laggin'
This feel like it's back in day
Shit is all ours like a captain would say
Treasure map is a trap and this rap is a raft
'Til you back on the ave, it's a matter a fact
That you gotta protect your neck like a giraffe
While the calendar countin' the days
The days only count if it's cash
When you hit the mattress imagine a mansion
I feel like I'm a mad man amassed in the vein livin'
I'm pretendin' I'm thankful at Thanksgiving
I just bought a chain, you can't change niggas
I see all my potential in pain dealin'
With the weight of success and it taste bittersweet
I mean, you far from your kin
You not one of them, to them to dim
You're light and get grim like a gremlin
It is what it is, until feelings switch and then it's

Your call has been forwarded to an automatic voice message system
(773) 345-9523 is not available
At the tone, please record your message
Saba
Hottest Songs

hot
Tyga - Lift Me Up