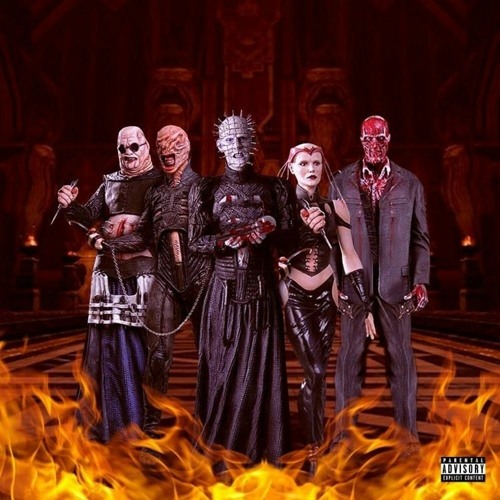 Intro: DJ Kay Slay]
Ayo, it's DJ Kay Slay, the Drama King
I don't think y'all ready for this shit right here
Hells Fury
Five of the hottest lyricists out here 'bout to set fire to your ass
Let's go

[Verse 1: Papoose]
Who nicer than Papoose? Is this even a convo?
Squeezin' the chrons though, leavin' a John Doe
Eatin' up y'all flows
We could even the odds, though
Swingin' the sword slow
Stick the knife deep in your heart, hoe
You leakin' in sorrow
Like O.J., I speed in the Bronco
I'm breathin' in no smoke
We could fight, you weak and you soft, bro
Leavin' your jaw broke
Speed of a Charlo, weavin' a combo
Cheap as your car note
Got the keys to a condo don't mean you a boss though
'Cause I hear you leasin' it all, hoe
Shoot like Ray Allen
Celtics back when we was with Rhondo
Beatin' a charge though
Represent features with Large Pro
You sick to your stomach like a dog weepin' with Parvo
Y'all some wussy rats, pussy cats, Heathcliff and Mongo
I never heard of you but when I unleash with this god flow you gon' make the papers
Extra, extra, read it tomorrow like The Color Purple
Feels like I'm readin' a novel so I ask, "Who are you?"
Like when Squeak was speakin' to Harpo
Handguns in the back seat, we let it bang
AK in the front like Akademik's name
Peace to Biz Markie, one of the hardest to live
Came in this biz' and made his mark, you just a mark in this biz'
Peace, King
Undercover haters and most of 'em only call you king when they want a favor
You a bird, I got the thing cocked
Wanna be Rick Ross, niggas think they fly 'til they got they wing stopped
[Verse 2: Rah Digga]
My niggas let the hammer pop
I wield a sword like I'm Lancelot from Camelot
Y'all niggas dance a lot
LV on the pants and frock
I'll make a show of catchin' internet trolls on these streets like Chris Hansen got
That boy pleadin' for his life, come get this camera shot
Tried to light his ass again, but the handle hot
Damn, shit still in the trunk, ain't get the chance to swap
Fuck it, put it back in the tuck outside the sandwich spot
It's like a bad sitcom you can't stand to watch
Got that boy good, too bad I was a fan of Ock
Fuck it, bring it back to the rappin', already ran the block
Jersey shit, niggas don't care if that's your mans or not
He gon' get this work, we ain't comin' for no chit-chat
Hear that click-clack, better duck behind that shit shack
Dependin' on the time of the day, you might get bitch slapped
Or you could get sprayed like bitches pullin' they clit back
It's crazy in these streets, y'all playin' with the beats
I was born into this game, like I was Kanan or Tariq
I'ma say it with my chest, my niggas say it with the heat
And you can't tell 'em shit with that 88 deep
Medusa head all on my shades when I'm lookout
Somebody yellin', "Shot" like it's spades at the cookout
I'm like, "God Damn, can't take these niggas nowhere"
So when you see me, peace Queen, it's no need to go there
Nah mean?
[Verse 3: Cory Gunz]
Yeah
Yeah
They murder you while they chant purge for me
With the scope on this burner, I could do ear surgery
Fall in order, we all in water, you can't merge with me
Verbally I will murder thee, inadvertently
Heard of me? Certainly
We major, you takin' soldier steps
She spent all your check and still ain't blow you yet, I give her COVID test
My pedigree is the letter G and only competition I ever see is a better me, so let it be
You fuckin' with a psycho hyphen lypo knifin', rifle hikin'
That's why you feel like you fightin' a bunch of Michael Tysons
Fright you hear, the lightnin' strike
When I flow, cypherin', I blow hydrants
Pyro sirens, Gyro tyrants
I snap with no Chiro license
You wanna travel, nigga? Try a morgue
You think I'm for the dialogue? Die a frog
Really that, I'm buckin' lead at your sacroiliac (Buck)
Til' your fuckin' dead as a necrophiliac
I'm usually with the Milli Mack
Defyin' gravity like I could pop a wheelie back
These niggas tryin' but I'm really that
These shots mandatory, we'll make sure he's fully vaxxed
Then make sure he's fully taxed
Nigga
[Interlude: DJ Kay Slay]
Man, what y'all thought?
Y'all thought this shit is over with?
Man, we ain't even start yet, man
This the true art form of lyricists, man
Bringin' this shit back 360 degrees
Let's go

[Verse 4: Royce da 5'9"]
These niggas blowin' smoke mad like glass dicks between a fiend's lips
We burnin' dope fast, I'll have your whole team green-lit
Pass your bruh head around the thread like a seamstress
They lookin' to be embraced by other kings, that's why their Queenzflip
Baggin' keys, Knicks shit, anything that'll get the clientele
To take my liberty back, have figgas stack 'case there's a giant bail
I was baptized before I was advertised and reformed
While these rappers die, I'm watchin' it happen live, Andy Cohen
We grew up on Mortal Kombat, we Sega babies
He say he play me, he A-B maybe, B-A Baraka
The babysitter ladies will let me see they barracas
I'm a 80s babies, A-Team sprayin' these B.A. Baracus, huh?
You too poor for war, you can't afford the morgue or a coma
You on promo tour
You on a Norbes phoner talkin' 'bout who the new Scarface
I go Brad Jordan on 'em before Corona
I put a hole in your son, that boy gonna need an organ donor
Smokin' on your disrespected dead pack stinkweed
Catch you durin' the Drink Champs, make all y'all niggas drink pee
To withstand the Fentanyl, the bricks tan, the bent keys
I did it all with quicksand, may charge you niggas sink fees
My Britain thing just adores the Geechi party
Y'all's be in D.R. where the Pauls and Lyors be
The whole picture change when they start seein' these Ferraris
So when I pull back, it's like y'all just PTR'd me

[Verse 5: RJ Payne]
Look, I brought this mini mack, it stretches long as my arm sleeve
Clips so long, look like I'm launchin' a palm tree
Diss me on a song, you get stomped into concrete
This sound like Biggie Smalls ridin' through Compton with Mobb Deep
Leatherface has returned, hesitate and get burned
Murder your favorite rapper then defecate in his urn, bitch
I'm the bomb, my detonation confirmed
I'm blowin' up, this when Nas had to separate from The Firm, woo
I'm winnin' regardless
Bitch, my pen is retarded, a limitless artist
This is a mix of Venom and Carnage, nigga
I'm independent, don't gotta blend with the garbage
Niggas lost, I feel free as a Mack 10 in a forest
So fuck your top 10, I'm top 5 now
I got the juice, connect with me when your wifi down
Your gun big, so what? How a tripod sound?
Special effects, it look like somethin' SyFy found
I got a gun so big it can't fit in the Uber
Fuck it, Royce is the gravedigger and my sister the shooter
It's a fact, Pap is The Terminator, dig the maneuver
Cory kinda like John Connor, boy, that kid is the future, uh
I blow through this Chronic, I broke through the bondage
I'm DJ Vlad, whatever get shot, you know who behind it, nigga
This vocal bionics, I'm past supreme
Ask the fans, I'm half man, nigga, half machine
It's Payne