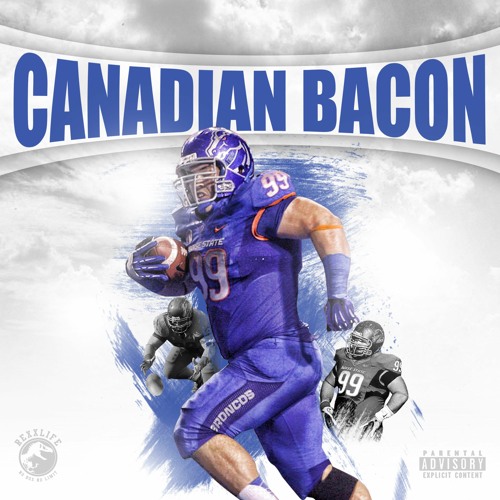 This song remembers the career of Michael Atkinson, during his time at Boise State University. He got his name because of his nationality, along with his weight; 300 pounds and a slab of bacon.

Good defensive play up front by number 99; Michael Atkinson
A freshman from Windsor, Ontario
Who is known as Canadian Bacon (Haha, oh that's great)
They went up to scout out someone else and they saw him playing in Windsor
They do some scouting in Canada and sure enough they...

Ay, air traffic control, I've been falling through the sky on niggas
They tryna hawk me, I keep a bird's eye on niggas
I get my glide on
I get to the bucket like Zion cause every time I pictured it clear
Like the Nikon, yeah
Cause of the beats I slide on I went from normal to local icon
Tryna avoid the pythons
Turn 'em to believes anytime I turned the mic on
And I don't play the game
Ain't put the chains or the ice on
Still colder than an Anchorage winter
This one's for Mike Atkinson
Canadian Bacon in Windsor, Ontario
Learnt how to be water, I fit in any scenario
I need the little homies to eat, like Little Terrio
I wrestle with the heavy shit but you won't see it in my face
I feel like Rey Mysterio, it makes for good material
Sold out in Boston, they knew every word, bro that shit was spiritual, it was beautiful, weather was terrible (Huh)
I could feel it all going fast
I remember my fat ass in the sweatiest shoulder pads
Got a little CTE just so Kellen could throw a pass
You better get off of the ball 'fore these coaches get on your ass
Maybe that's why I'm so competitive
I learned to overcome it when that self-talk would be negative
Bro, everything is relative, huh
Run the team like I'm Peterson, set the precedence
The parallel between now and then is we still get hella wins, ooo
Sometimes you gotta pop shit
The world's still full of jackasses on that Johnny Knox shit
And it's obnoxious, yeah
Broke and alone with the Twitter gossip
I refuse to argue with grown niggas still eating hot chips
In a bitch face with red crumbs all on your top lip
Black Air Forces, fingernail's dirty, lookin' like you shoplift
I've been here, gettin' to it cause I'm speakin' it
Be open to the idea and open to receiving it
Social media got you thinking "This shitty media"
Be we ain't cut a corner like Taylor's, this shit is tedious
Nibble on the 'shrooms 'til I'm trippy and feel Bohemian
I like my weed with low TAC and some CBD in it
Don't watch me, watch the bitch, be obedient
I'm finna wake it up like f**k your sleepiness
Bitch f**k your sleepiness, yeah