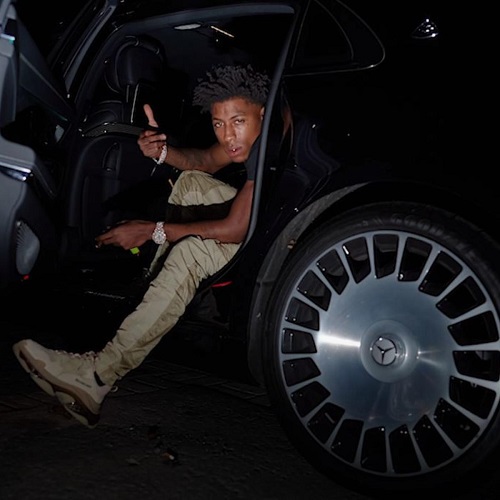 (It's Young)
(Mook got the keys jumpin')

Before the night, it's gon' go down, I end up shootin' in this bitch (Ooh, nah)
Two clips together at your round, I let it loose in this bitch
Keep plenty guns', come from slums
Like, fuck how ruthless it gets (Yeah, yeah, yeah)
It's straight redrum, I scream out dumb
'Cause I'm gon' shoot once you pick (Yeah, yeah, yeah, gang)
And that's a death row stick, 'cause it got bodies on it
Came from a society where you drawn for catchin' bodies on it
Bust as soon as I spot it, homie, face that too, my thot be on it
Tell bro, "Move right, the cops been on it"
Can't copyright, change your persona
Bitch nigga be actin' stiff, got the bar up in it, we can meet up in it
Fuck nigga, you'll work or do your job, remember, we ain't friends
Bitch nigga hatin' who I am, same kid from inside the pen'
Same nigga throwin' up the Nawf, walkin' up and down the street with the twins
Get in your shit, then I dive again
When that bag came, then the rob was in
Bitch, I been a survivor, lyin'
Full of shooters, nigga, this a shotta's pen'
.357 with them coppers in it
Reaper of the industry, they say, "Killer ghost"
Never tell his thoughts, they'll never know
He be maxed down with that calico
On Connect Street with that, know your dough
Hunnid grand, I connect the four
Ridin' 'round with a spark, bitch
When a nigga tell me, so the line is, "No"
Disrespect my mind, you know
Show that daddy how it go
Leave these bitch bitches, hit the block
Spin again when at the store
Try and run and sprint, shoot at that ho
Demon baby, demon flow
Say they fuck with you but really don't
A-I gang 'cause I seen it before
Real gang baby made through the snow
Like a Hot Boy, I been in here
Come on Top, boy, it's killin' season
Catchin' a water shark for any reason (Grrt, bah)

Oh, oh-oh (Tryna talk my talk, that shit)
Chasin' money, steady thuggin' from the cop cars (Yeah, I come in here)
Post up on the block, still, they made him show the Rasta'
Nigga, do you catch the drift? (Bah, bah-bah)
Oh (Boom, bah, gang), oh-oh (Lil' Top)
Walkin' straight up outta Hell with them cold killers (I did, I did)
Ayy, straight up out the back with them same niggas
Ayy, soul stealers, big chain, he gon' get attention

From the parkin' lot, hit that bitch from the bleachers
Runnin' with creatures, we steppin' on leeches
False claimin', we gon' murder to teach ya
Do the whole thing when you play with that Nina
Got a bad nose, then you might catch a seizure
Pull up, blow that bitch up for no reason
Shoot that shit up, then we leavin'

Fuck wrong with these niggas, man?
I want these niggas to understand, 'til I'm sayin' with these demons (Bah, bah)
I said, "Kill the home, all of them"
Cravin' for that blood, I'm sittin' up
I need three more, like, bitch, I need
(I need ten, bah, I need ten
Ten motherfucker, ten, baby
Ten lil' babies, oh)
NBA Youngboy Soul Stealer
Hottest Songs