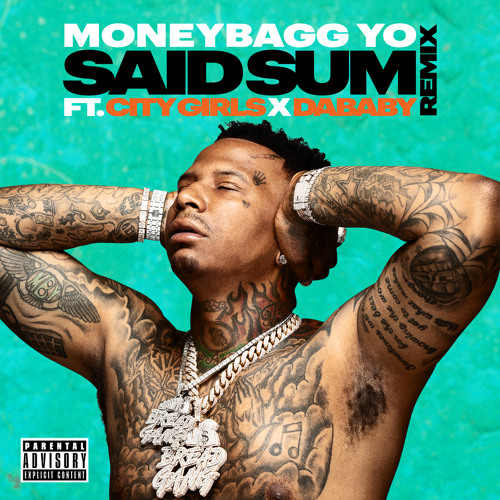 Uh, fuck nigga, I don't wanna hear it (Nah)
Ain't talkin' the bag, I cover my ears
I hop in the Lamb', I'm switchin' the gears (Skrrt)
My bitches is ballin', make these niggas chill
Audemars, baguettes with the crushed face (Ice, ice)
I leave a bitch mad with the stuck face (Ha)
Who the fuck are hoes playin' wit' anyways? (What?)
City Girls make 'em wish like Ray J (Let me talk to 'em)
All these niggas wanna fuck JT (They do)
Hellcat, this a SRT (Skrrt, skrrt), pull up, G-Wag', '63 (Ow)
Make a fifty-five suck they teeth
He wanna mеnage with that new body (Ow)
Man, you niggas can't fuck with me
'Causе I came from the bottom (Yeah, yeah)
From the Feds to the [?] (Yeah, yeah)
Broke bitches ain't sayin' a thing (Period, yeah)

I tell her, "Shut the fuck up," when I hit it
Fucked up her hair, she just did it (Let's go)
I'm really fuckin' 'round with his lil' boo on the low (Ooh)
Went to fuck but he said I couldn't hear 'em (Shut up, lil' nigga)
I keep the head while I drive, almost fucked in my ride (Skrrt)
Had a hand full of hair while I'm steerin' (I'm serious)
She rippin' off my Amiris
She love to get hit, she pull up on her period (Period)
I thought somebody said, "That's your wifey, dawg" (Huh?)
Fuck everybody, don't like 'em all (Go)
His bitch love me 'cause I fuck like a dog (Woo)
I got this shit on, nigga, wipe me off (Yeah)
I hop out the backseat just like a boss (Woo)
I two-tone the Maybach, my seats Ronald Reagan
It came with a pillow, I came from the pavement
Thought somebody said I ain't made it (Go)

Huh? (What?)
Ah, I thought a broke nigga said somethin' (Ah)
Talkin' shit but they still ain't sayin nothin' (Ain't sayin' nothin')
We gon' trap this bitch out 'til the feds come (Run it up, run it up)
Huh? (What she say?)
Ah, I thought a pussy ho said somethin' (Ah)
How it go when I'm talkin, you listen (Just listen)
Cut her off 'cause she spoke on the business (Go)

You broke ass bitch, you ain't sayin' nothin'
When I hold up my wrist, it's sayin' somethin' (Yeah)
Your nigga, he know, 'cause he payin' somethin' (Damn)
I ball on these bitches like and one
Swish, bitch, I'm the shit, QC the clique, we rich as a bitch
Yeah, ayy, Miami, I'm lit, Patek on my wrist
Bought it, the drip, my jewelry sick (Ice)
Pneumonia pink diamonds, got the corona (Ugh, ugh)
Moneybagg Runtz, that's the aroma (Woo)
This ain't no med' from Arizona
Bitch, I'm serious (Real), period (Period)
All that ho shit, I ain't hearin' it
My niggas pull up with sticks, they clearin' it (Brrt)
Yeah, me and JT, we killin' it, period

I thought a nigga who watch what I do
But he can't get his bitch back sayin' somethin' (Tough)
Is it true that he postin' another nigga money?
Prolly, I don't put that past him (Maybe it's up)
I thought a ho that be speakin' on me
But be fuckin' a broke nigga sayin' somethin' (Listen)
Hold up, lil' bitch, get a nigga that's lit
I'm the whole loaf, he the bread crumbs (Go)
Rappers with these mixed feelings (What?)
I ain't fuckin' wit' 'em (Nope)
Like a Richard Mille, let me know what time it is
Bagg, where the Runtz at? (Huh?) Know you got it on you
'Posed to be smell-proof, bustin' out the vacuum seal
These niggas lil' boy, childish, Fisher-Price
Confidence in 'em like cocky so get it right
She bendin' over but I want some head first
I don't even wanna know what the pussy like
Trippin' to close to father so I'm ballin'
It's crazy, my opp got shot but I ain't call it (Sike, slow up)
I come around, niggas gon' put they ho up
These bitches stay on my channel, yeah
Must've seen me on TV, yeah
It took me six hours to count a mill', exactly
I'm accurate with that cheese, yeah (Big bag)

Huh? (What?)
Ah, I thought a broke nigga said somethin' (Ah)
Talkin' shit but they still ain't sayin nothin' (Ain't sayin' nothin')
We gon' trap this bitch out 'til the feds come (Run it up, run it up)
Huh? (What she say?)
Ah, I thought a pussy ho said somethin' (Ah)
How it go when I'm talkin, you listen (Just listen)
Cut her off 'cause she spoke on the business (Go)
MoneyBagg Yo City Girls DaBaby
Hottest Songs