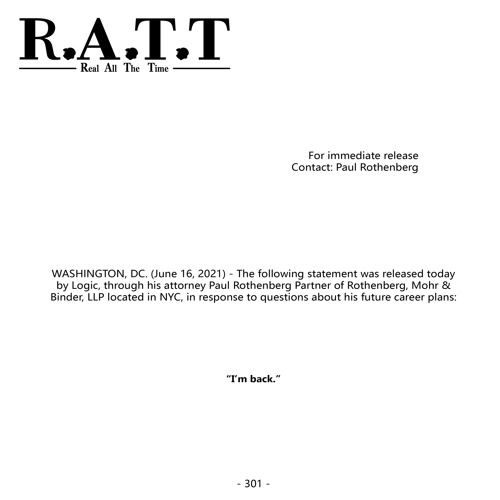 Give Rating
“Intro” is Logic’s official return to rapping under his stage name following his “retirement” album, 2020’s No Pressure.

I got rent, I got bills but I want a record deal
Don't wanna give up on my dreams 'cause I know I got skills
People sayin' I won't make it, sometimes that's how it feels
Dreams and ambitions of makin' millions from record deals
Emotions, I let it spill, I'm goin' in for the kill
Give 'em my everything still, I hope you feel me for real
Just me and all my homies, we want it now more than ever
Destined to work a nine-to-five, man, fuck all that, whatever
I want this life forever
I wanna make it out my hood, I wanna do shit better
I got nothin' to my namе, not even no GED
But I don't wanna be somе has-been, lookin' back at forty-three
Wonderin' who he could be if he had the guts to take the leap
That's why I'm here to take the beat
And not repeat the cycle of people who never lived their dreams
I was destined a life of nothin', my parents both fiends
My name is Logic, I wrote this record at nineteen
And now at thirty-one, I read pages from my old rhyme book
Thinkin' 'bout the time that it took to get here
See it clear like Visine, me and my regime made it by any means
Used to eat at Denny's, now it's Nobu, hella clean
Relieve the pain like ketamine, relive the pain and let 'em in
Started as a freshman, now Logic a veteran
Thinkin' 'bout the time it took to get here
I signed a deal and made the mills, can finally afford to pay the bills
This world is cold as fuck like I'm from the 'Ville
Let that last line chill, everything I ever wanted, now I got it
Fuck a subject, school, I dropped it, grabbed a gat and cocked it
Me and my homies in the lab, dope shit, what we concocted
Yo, I been to hell and back, motherfuck a platinum plaque
None of that, it don't mean shit if your family ain't got your back
I'm unretired, yeah, I'm back, that's a fact, that's that
Logic
Hottest Songs