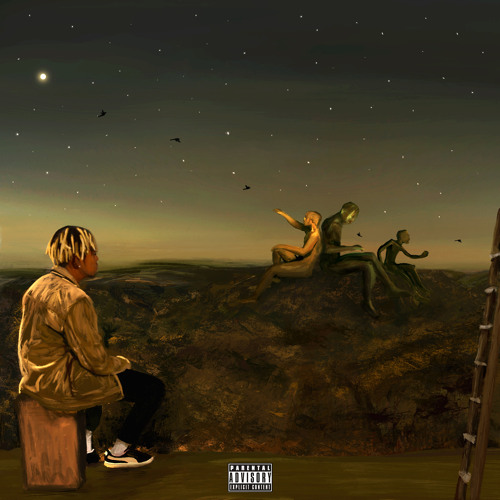 Done seen some shit within my lifetime, my light shine bright
Protect yo' energy from poison when the python strike
My first mistake was doin' robberies on Niken bikes
Watch my movеs and I'ma show you what a icon like
Y'all let bygones bе bygones, right?
Nigga, fuck yo' truce, bust yo' move
And if that nigga touch your shoes
You better blast on 'em and on my mama, nigga
I'ma get that cash on 'em, hunnid on the dash on 'em
Swerve, born from the trench, you from the 'burbs
Nigga, fuck the early bird, nigga
I'ma get this motherfuckin' chicken
And if a nigga ever got a problem, nigga
We can fuckin' solve it, on my mama, nigga
I just been itchin' to prove myself
I just pray throughout the struggle I don't lose myself
Glock, no safety, Plaxico, I might shoot myself
They catchin' bullets like two Odells, and, nigga, you gon' tell
But listen

First and foremost, for every door that's opened, a door close
Beat a nigga, take his Bordeauxs, upgrade my wardrobe
And Lord knows livin' like this, it leads a short road
A dead end, or prison time, where we was headin'
Instead, when I got bread, broke it with brethren
Eyes open, leave the house, move like a veteran
Made a couple dollars from come-ups, my niggas flexin'
Nigga got a problem, then I can make some corrections
Okay, cool, still with the same niggas since grade school
Give a fuck about your Shade Room when I had made room
For everybody on that late moon, and word to Rae Sremm'
Had to bring the motherfuckin' swang on 'em
And I ain't even wanna have to blank on 'em
That Lam' truck got a full tank on 'em
But, a nigga better not look at me wrong
It's certain shit that I can't say on this song, but let me tell you, nigga

I done seen some shit within my lifetime, at one time I
Can still remember just how bad I used to want '5 mics'
My biggest dream was just to make it into Unsigned Hype
It's so hard for me to fathom this was once my life
Shit'll make you wanna cop out like a plea deal
So I treat a beat like it's Tekashi, spit on that bitch like Meek Mill
My addiction got me weak-willed
I'm relapsing, I think I can't seem to stop eating Beat Pills
And Doctor D-R-E he still keeps on giving me refills
Send 'em at me, bullets hit indiscriminately
Women and men and little kids senior citizens till the Sig is empty
Whipped Gen-Z into a frenzy, but no give, is in me, I'm stingy
And that is the motherfuckin' difference between them and me
And that's the reason I'm, in my Louis Vuitton
Gorier than Eva Long
This rap shit, is somethin' that you'll never see me at, like senior prom
What I mean's the bar's, higher than Cheech and Chong
When you give them each a bong
I call my Stan's a, fan club 'cause whoever it's unleashed upon
Fuckin' beats up on, like police batons
Y'all are window shoppers, bunch a Peeping Toms
Still got that bullseye on my back, red dot on my head
Yeah, blood on my hands for some of the rhymes that I've said
Police squad on the task
Got 'em hot on my trail, like my stepfather with the belt, I got S.W.A.T on my ass
I was painfully shy, now I'm proud of myself
Like Obama's kids, I came outta my shell (Michelle)
And I can promise this
On my mama, shit, no daughters, bitch
That every single word'll be true so with out further adieu
It's return of the ruthless more murderous than Mook is so what you're gonna do's think I'm allergic when I point this motherfuckin burner at 'chu
I throw shade it'll be curtains for you
Pray for the verse to get through, birth of a new
Worser me who's determined to do
Permanent damage with the words that I threw, bird's-eye view I'm referred to as Zeus
Circlin' you like I'm a vulture features are tournaments, I turn 'em into
Turning me loose is like verbal abuse, language hurtful to use cursin' at you
Made a couple of mistakes that occurred in my youth, jumped a hurdle or two word but I'm through
With tellin' you about the food stamps and the government cheese
And how we used to get school lunches for free
Already told ya, 'bout the holes up in my Pony shoes and Rustler jeans
When it was Mother, lil' brother and me
I told you 'bout, being kicked out 20 degrees, no money to eat
'Bout the thrift stores and being piss poor, the Christmases Ma had gifts for us, when bro and me discovered that she
Was wrappin' shit up around the house, to stick it under the tree
Damn
Cordae Eminem
Hottest Songs