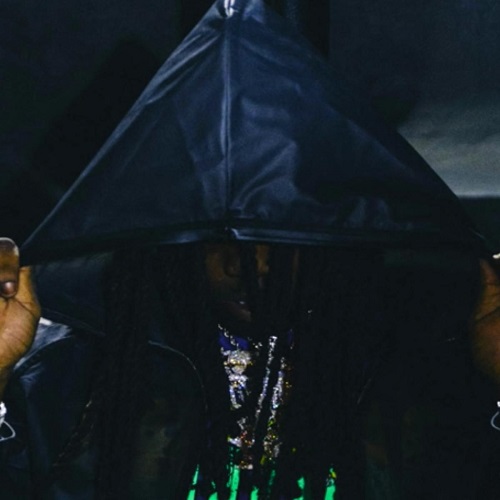 Starting off my day with a blunt stuffed
Pussy kept on talking he got fucked up
Big black Glock and a cup of purp
You already know I'm finna sip some sizzurp
I'm back off in the kitchen working with the pass
Say you need a half of brick give me twelve-five
Fifty pounds of Gross several pounds of Midge
Tadoe just brought a pretty fucking fifty
My gun need a mag he happy then he mad
Someone leavin' real soon, so he send his ass
Hop out of that van where I tote the mags
And if a nigga try me Imma do his ass
I'm counting up the paper in my office room
And I'm witch bitch, please don't make me spark the broom
Guns in every little cut, like a fucking savage
He's with a SWAT team, come you gotta fucking have it
Man I'm tired of  I need a rocket launcher
You ain't trynna creaminate it, bitch stop the camera
I used to drive the foreign through my backyard
Hit the dough and Imma blow you like a sex car
Sosa back bitch, yeah I'm back bitch
Done his stupid ass, dirty ass, black bitch
This that new shit, the fuck the jail shit
Fuck nigga, no, that it ain't no in my heritage
You on my shit list, you like a biscuit
Granny say if it ain't broke don't trynna fix it
I got a sick wrist, it cost like six-six
Zero zero zero nigga, come and get this
I got a stupid swag please don't touch my Louis bag
Pull up on me nigga you gon' make me do you bad
Bitch my Louis bag, that bitch Scooby snacks
I need an elephant, giraffe and a coo coo cat

Bitch I end my day ten...
Bitch I end my day ten in the morning
You can sneak diss this bitch still is going
We gon' hit his block, pull up, hit the horn
I ain't talking the whip bitch, this bitch is blowing
Stick a silly nigga now he's sillicony
Granny what you doing? She say I'm wiping corners
I just bough a chopper bitch just to shake the storm
Pull up out to tour and we shake the dorm
Say you can't stand me pussy take the seat
Call 'em McDonalds 'cuz he faking beef
Hit the back block and then take the street
Piss on his grave I got to take a lead
Standing on the curb and I'm flaming dope
Seventeen years old I was strangling hoes
Had to grow up and make a bankroll
.40 get to singing, she gon' take your soul
My auntie need some strips, sister need a crib
Told her tie your shoes lil' baby and don't even trip
I hopped up in that truck with the double cup
And it can't spill I make that bitch buckle up
I count up bodies as they fucking drop
Nigga think he had them streets we had to break his law
He got a hot fame we had to shave his
Car so loud vroom vroom, I wake the block
Four portions out elevens, it's like eight bitches
It's a horse on the seat they trynna take pictures
And these pussy niggas scared you know I hate chickens
He didn't call it domestic it's the state business
Make them see the light in this bright white
Young boy brown as shit but my ice white
They spying on the spot with them fucking drones
Tell them helicopters get the fucking on
Baby I'm lowkey if I'm fucking you
I can fucking don't say shit this what I do
Smoke them like a Kay like my cousin Ku
Bullets popping out like a fucking Boo