Black Thought - Thought Vs Everybody 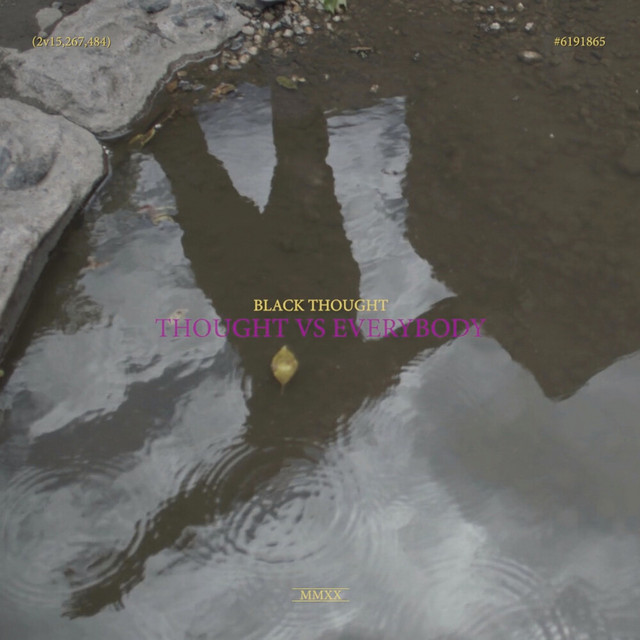 Ayy yo
They asked why I seem so solemn
On the throne between three stone columns
You know the name, fuckin' up the game, no condoms
Everybody goddamn first world problem
The truth is inconvenient as non-believers
Fearing DACA dreamers instead of FEMA
A Bentley, Benz or a Beamer, Fiji or Aquafina
(Everybody, every goddamn body)
We fuck around and be the next Iwo Jima
The tides risin' at the same time like they synchronized
For makin' art, for makin' love, for makin' Hajj
The home is where the hatred lies, they takin' lives
But everybody just so saved and sanctified
Then they rely upon, we, the few defiant ones
(Everybody, every goddamn body)
Communicate in the higher forms than Viacom
To dialogue before the raw or the riot horn
I wonder on which side of the lines I belong?
Lady Liberty face full of concealer
I'm half Masta Killa and half Hugh Masekela
Latrophobia, that's a fear of the healer
Kaepernick is an activist, y'all in fear of the kneeler
Everything's obtuse, nothin' is obscene
Another young life was lost on live stream
Another great fell from grace in high esteem
Then the clock struck thirteen, we in some kind of dream
First, I'm handling first things
Decipher what it means to a planet of earthlings
When a question remains, am I am journal or journalist?
Herbal eternalist, olympic tournament level genius author, affirmative
Though turnin' back and returnin', I'm not concerned with it
The permanent ink paved the way out the turbulence
My hands against the wall outside a billiards hall
I hear police discussin' whether to try and kill us all
I questioned if that would matter
Much like a tree that falls in the woods
Even with iPhone footage to see it fall
Great men chose the Papermate Pen or State Pen
The firin' pin of a pistol aimed at a playpen
We go for musket to a missile to a revelation
(Everybody, every goddamn body)
Between heaven and Satan, while I'm steady creatin'
And try to separate the truth from the lies that they told us
I even heard the Soviet's, the 45th POTUS
That ain't the photo they showed us, or acceptin' the onus
Did they Washington us? My condolence to y'all diplomas
Here's a bonus, the point of view to make things see through
If I'm a walking institution, I'm a HBCU
Face the music, keepin' it moving's one of the great things we do
Yo, the devil's tryna to pull together his gang, me too
And whether you come from Lagos or Trinidad and Tobago
You can either stay broke or be wealthy as Jeff Bezos
If you just stay woke, I was in the dark then day broke
(Everybody, every goddamn body)
Directin' questions to my ancestors, until they spoke now
Inherently rockin' the disco currently
Bars is cryptocurrency, hypnotherapy
Shittin' on everything, 5'9, 6'4 lyrically
Crystal clarity, wonder how I spit so thoroughly
Stay so hungry, rappers can't get no mercy
(Everybody, every goddamn body)
That's the reason any other one who spit won't verse me
It's so lonely in my own class "Formerly known as"
And the inscription that your headstone has
On my own path, in my own world like Disney's
I feel the fuckin' system failed just like kidneys
Up steps the one who upsets all carriages
'Cause it's imperative we change the narrative

Yeah and that's Thought vs Everybody
Listen, check it out, that go to everybody
Yo, I got myself over everybody
Yeah, every goddamn body