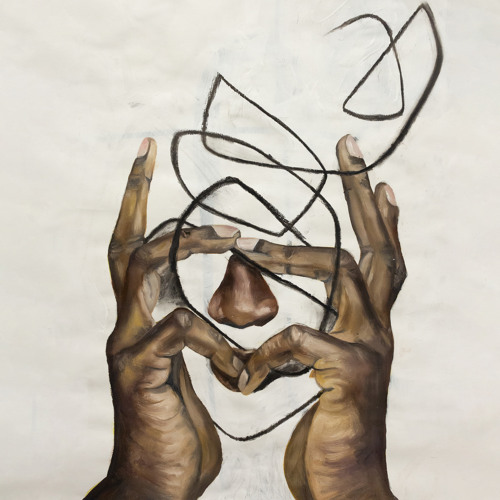 Don't forget who I am, don't forget what I am
I am a black dude
And don't ever forget how I got here
My ancestors were kidnapped
I don't even know where the fuck I'm from
They were put on the bottom of boats
They sailed them across the Atlantic
Many of them died, only the strongest survived
And once they got here, they beat the humanity out of my people
They turned us into beasts of burdеns
They made us do their work, and thе irony is
Hundreds of years later they're calling us lazy
We fought in the Civil War, we damn near freed ourselves
Now here we all are, 400-year nightmare
Took us 400 years to figure out as a people
That white people's weakness the whole time
Was kneeling during the national anthem.​

Hahahaha, heh, heh, heh, aw shit
Yo, give my regards to Paris
I make 'em go bananas for the noble savage
Steak 'em, let 'em have it, allow me to establish
The tone from a holdin' pattern above Saturn
Listen, they told me I was bound to lose
I had the crown to prove and fucked around and found the tools
Coulda failed, but I'm more compelled, I torched the trails
Of an Orson Welles, rock jewels big as oyster shells
To go from showman to shaman is not common
What's a goon to a goblin? What's a goblin to Amen Ra
When the God's been a problem? Now get your fuckin' shine box
Before I put your party in a pine box
Remember we was broke as a promise
Let's be honest, them hard times scattered behind us
Yachting through the Bahamas, 'bout to play St. Thomas
Cabernet Sauvignon with Fabergé egg omelets

Uh, slide down
Nigga gon' slide down Fig' like
I parked the crooked 'cause the Sig pokin', ayy
Eye for an eye, gon' keep the tears rollin', yeah
I'm Beethoven to the bass swollen, yeah
Starin' in the mirror, I was God's bonus
Yeah, I ain't ask for shit, I was chose for this
Plot twist, one day if my gifts got the homies chillin'
Grooviest, hood politics, the Crips scholarships
Gang foul, equal noose now, it ain't the same 'round
Aw yeah, this lifestyle we livin', ayy
Niggas turn to base heads from picture, ayy
And leaned into the crack, got out of business, huh
Now blacks doin' coke, what's the difference now?
Pigs turn my loc' to a witness now (Shit, fuck, fuck)
The stakes raised, well done, salute, uh
This young loc done popped out the blue, uh
Die young, I keep peace to shoot
We all knew this sixteen's the truth, yeah
Blacked out and I find out the scoop, brrt, ayy, woo
Black Thought ScHoolboy Q
Hottest Songs