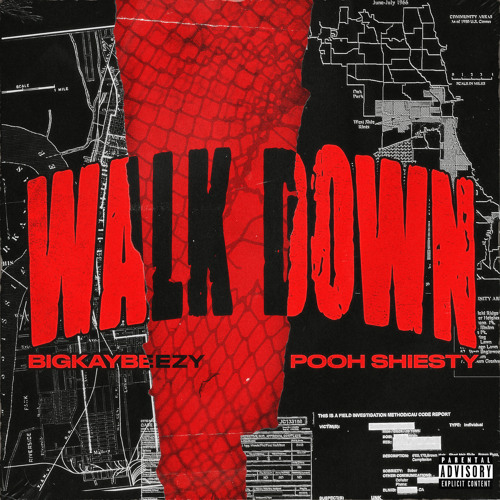 Walk down gang, we don't drive-by
You was pussy, now you gang gang, look how time fly by
I'm in this rental off two 30s tryna slide
Any nigga diss the guys, they had died
And if not, got on they side, ayy

Pussy, yeah you chicken, come get fried
We got pressure in these 30s, come outside and this pressure gettin' applied
I want him gone, he keep fuckin' up my vibe
Yeah, he twelve, he all on live
Actin' tough as hell, he must be out his mind, uh
Big boss Beezo in this bitch, I'm out my body
I'm gettin' rich, I feel like Roddy
Serve the fiends Fentanyl and Molly, uh
Told her don't act like you want me, bitch you want my profit
I could make her think she poppin' when she not
I was just , uh
Big boss status
Pockets fat as hell, they on ol' Rick Ross status
Don't get flipped like you in gymnastics, uh
Niggas hard online, but in real life he made of plastic
You ain't built the way I'm built, 'cause you wasn't cut from the same fabric

I want 'em to see my fame, when I walk down, ain't no disguise
We'll still creep on you, I'll make time
Two to the dome, it's for sure he died
I know he finished, don't go check, I got bullets you can't survive
Better enjoy the life you live, and these blue tips eat you alive
Still take hits for the top dog
Remember it just cost a dime
Bad bitch, I make her swallow, now all her captions say "Slime"
He robbed and trapped me like a rapper, bitch, this shit deeper than rhyme
Called out of bounds, and we whack 'em, ain't no get back for your guys (Blrrrd, blrrrd)
I'm Head Honcho, my main hitters lost so I go spend myself
These diamonds dancin', 57 hold up my pants, don't need a belt
Just me and a bad bitch remembers that I need help
Pull you out after we fuck, she text me back "That's how you felt"
I'm banging Big so icy, gang, yeah, this is the candy that don't even melt
I got some shit you can't run from, you'll be whacked before you take a step (Blrrrd, blrrrd, blrrrd)
We walk 'em down with Air Force One, hop out on you, shoot 'em like I'm Steph
.50-cal too loud, suppressor on it so I won't go deaf

Hop out the whip, walk 'em down and get gone
They like Beezy, chill out, you be doin' the most
One opp down, so you know we makin' a toast
A hundred more rounds for whoever was close
I put red in his head, now he look like Lil Boat
And shout out to Yachty, that's bro
Might go hit a lick and fall off in a club with the Glick in my coat
Nigga, who want the smoke? Uh

Walk down gang, we don't drive-by
He was neutron, now he gang bang, look how time fly by
I got his OG sittin' there cryin', she like "God, why?"
I put thirteen hollows in his mind, just when he thought shit was fine